Moderate exercise is too soft for HF patients: call to increase the ‘dose’ 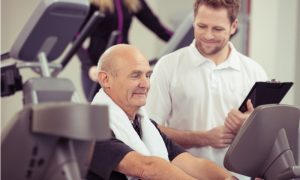 Heart failure guidelines have been criticised for not going hard enough in their exercise recommendations for patients.

The 2018 National Heart Foundation and CSANZ guidelines recommend regular performance of ‘up to moderate intensity’ exercise in patients with stable heart failure.

However an editorial in Heart, Lung and Circulation has questioned whether the recommendation limits the potential health benefits that might accrue from higher intensity exercise.

“Unequivocal evidence exists that limiting intensity to moderate, deprives some patients of the optimum exercise regime as vigorous and high intensity delivers greater gains in fitness, one of the strongest indicators of future heart failure health in those patients who are stable enough to tolerate it,” the editorial said.

Professor Neil Smart, head of exercise and sports science at the University of New England, said in the editorial that one of the largest exercise training trials (HF-ACTION) used as evidence in the guidelines involved vigorous intensity exercise.

“It therefore appears counterintuitive to continue to adopt moderate intensity as the standard when there exists a greater volume of scientific evidence relating to exercise data at vigorous intensity in people with heart failure,” Professor Smart said.

However oxygen consumption was a surrogate outcome and studies have not been powered for clinical outcomes, he said.

“Indeed, the largest RCT did not achieve its primary endpoint. So we did consider this, but did not think there was sufficient evidence to make a recommendation for HIIT.”

Professor Smart called for ‘a paradigm shift’ in exercise prescription.

“For example, we know that most medications carry a small risk of side-effects, but unless patients were unstable or obviously unable to tolerate a higher dose, doctors would not hesitate about prescribing higher doses of say blood pressure medications to patients, if therapy targets are not reached.”

“Many of us would probably choose to be treated by a doctor who would prescribe a dose high enough to offer the desired therapeutic effects.”

“Whether it is tradition or emotional intuition that has led to the ‘moderate intensity’ limit, the time has come to consider all of the available exercise epidemiology evidence when the next opportunity arrives.”