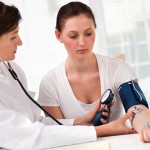 Women who have difficulty conceiving face an increased risk of miscarriage if they have raised diastolic blood pressure at the time of conception, new US findings show.

In a retrospective analysis of data from 1200 women under the age of 40, researchers at the US National Institutes of Health found that for every 10 mmHg increase in diastolic BP there was an 18% higher risk for pregnancy loss.

Women in the trial had an average BP of 111.6/72.5 mmHg. An  increase in pregnancy loss was seen among women who had a diastolic reading above 80 mmHg (approximately 25% of participants).

While not establishing causality, the findings suggested that preconception blood pressure may be a factor in the mechanism for pregnancy loss, according to the authors of the study published in Hypertension.

They postulated that the inflammation, oxidative stress, and endothelial dysfunction that partly underlie development of essential hypertension may also contribute to pregnancy loss by adversely affecting reproductive processes such as the quality of the oocyte, implantation and decidualisation of the endometrium, and vascularization of the placenta,”

However they cautioned that the women enrolled in the study were relative young to have hypertension and also had a history of previous pregnancy loss, so the results may not be generalisable to the wider population of women.

Nevertheless, the findings suggested that a marker of cardiometabolic risk, pre-conceptional BP, could be a target for lifestyle measures in women at increased risk of pregnancy loss, the study authors said.

“These findings suggest that screening and lifestyle interventions targeting maintenance of healthy blood pressure levels among reproductive-aged women may have additional important short-term benefits on reproductive health,” they wrote.

“Our findings are particularly important as they describe risk among women with a history of pregnancy loss, who are at higher risk of experiencing a future loss  and for whom preventing pregnancy loss is an increased concern,” they added.