Cardiologists are among the nation’s top earners, but female cardiologists earn only half as much as their male colleagues.

Latest figures from the Australian Taxation Office show in 2015-16 the average annual taxable income for a female cardiologist was $266,805 compared to $484,086 for a male cardiologist.

The figures also show there has been a significant increase in average annual incomes for both female and male cardiologists compared to the previous year before – with women  earning 20% more (up $44,073) and men earning 5% more (up $24,878).

The ATO figures show that being a doctor is still the most financially rewarding career in Australia – the top three highest-earning occupations are all medical specialties. 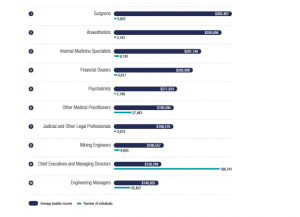 Financial dealers came in fourth place on $263,309 with psychiatrists ranked fifth  earning an average of $211,024.

Doctors who fit the category of ‘other medical practitioners’ earned an average $199,590 making them the sixth highest earners in the country in 2015-16.