From stents to stem-cell meat products: one cardiologist’s journey 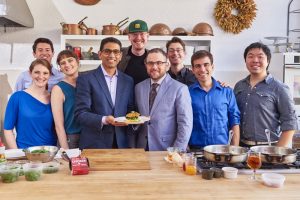 Dr Uma Valeti is a Mayo Clinic-trained physician who has swapped a Minneapolis cardiology practice for co-founding Memphis Meats, a US-based company that produces laboratory-grown meat made from stem cells. The company, which currently offers beef and poultry products such as meatballs, chicken tenders, and duck breast, aims to be in large commercial scale production within a decade.

In an interview with JAMA, Dr Valeti explains how the catalyst for this work occurred during work on a clinical trial which used stem cell therapy to regenerate heart tissue.

“I’ve been interested in how meat gets to the table since I was a kid, and I always thought the industry, while extremely efficient, was not scalable to sustain the increasing demand for meat,” Dr Valeti told JAMA.

“Subsequently, in my own cardiology practice, I was involved in a clinical trial where they injected stem cells into patients’ hearts when they had a heart attack to see if their cardiac function improved. That’s when I started thinking that maybe growing food from cells should be done in the real world.”

The production process begins with sourcing cells from high-quality agricultural animals, then identifying those cells which are capable of self-renewal and have the features to produce the desirable taste, texture and nutritional profile in the end product. The cells are kept in a controlled production environment and fed with nutrients – vitamins, minerals and amino acids – until the meat is ready for harvest, which usually takes 1 to 2 months.

Once harvested, the cooked product is offered to a members of a “sensory panel” who are also given samples of a comparable conventional meat and asked to compare the two.

The results so far have been very positive, said Dr Valeti.

“The magical moment really happens with consumers when they taste the product. A meat eater immediately recognises this as meat. That’s when the moment of acceptance happens.”

He believes the future of cell-based meat is very promising: it appears scalable and offer a real solution to the problem of how to meet the world’s growing demand for meat, and is expected to require less than 90% of the land and water needed for current animal agriculture.

“For 7 billion people, we have to raise 70 billion animals now. And in 30 years, if the demand for meat is doubling, we’re going to have to produce 150 billion animals. So there’s not enough space in this world, unless we start raising extraterrestrial animals…..This could supply a dense population in a sustainable way.”

There is also scope to design meat with certain properties, and even envisage a future where physicians prescribe cell-based meats to their patients.

“It’s pretty well known that patients with chronic kidney disease are on the increase and one of the typical therapies for them is a low-protein diet. On the other hand, for athletes who are looking for high protein with high bioavailability, we see that cell-based meats could offer that as well.”

Bringing consumers on board could take work, but Dr Valeti says “the timing for cell-based meat is really good now”.

And while the cost of production was initially exorbitant – at almost $1 million per pound – this has dropped rapidly.

Dr Valeti and his colleagues hope to be able to offer cell-based meats and poultry at a price on par with conventional meat within two to five years, with large scale availability within a decade.

The jump from practicing cardiologist to biotech entrepreneur has been a surprising one, and Dr Valeti admits there are occasions where he misses treating patients.

But at the end of the day he feels like he’s found his calling.

“While I loved cardiology and still do, maybe I would save the lives of 2000 or 3000 patients if I continued practicing cardiology for the next 30 or 40 years. But if the work we’re doing now can scale, I think it could have a positive impact on billions of human lives and trillions of animals. This seemed like a risk worth taking.”