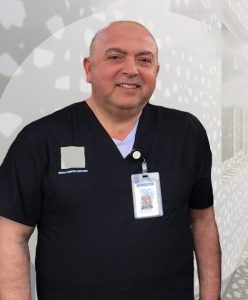 Cardiologist Amjad Hamid has been named as one of the victims of the Christchurch terror attack by a white supremacist.

Dr Hamid had worked as a cardiologist for the Canterbury District Health Board for 20 years, and also had a visiting role in cardiology at Hawera Hospital in the North Island’s Taranaki district in addition to his work at Ashburton Hospital.

The 57-year old moved to New Zealand from Palestine 23 years ago and had made a great impression on all those who worked with him, according to colleague Professor Dick Sainsbury, an emeritus professor of geriatrics at the University of Otago.

“He was very much as esteemed colleague and he had a great sense of humour. Patients loved him …” Professor Sainsbury told Radio New Zealand.

Dr Hamid had done a PhD in atrial fibrillation, and also qualified as a rural hospital medicine specialist.

Rosemary Clements, chief executive of the Taranaki District Health Board, paid tribute to Dr Hamid in a statement.

“It is with great sadness we pay our respects to Doctor Amjad Hamid, a senior medical officer and rural hospital consultant at Hāwera Hospital, Taranaki.

“He was well liked for his kindness, compassion and sense of humour. He was a hardworking doctor, deeply committed to caring for his patients and a thoughtful team member who was supportive of all staff.”