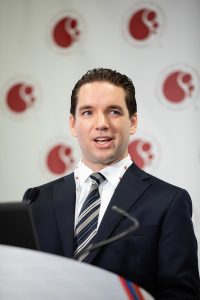 Aspirin use in combination with DOACs appears to increase the risk of bleeding in patients without providing any additional protection from thrombotic events.

According to a US study presented at the 61st American Society of Haematology (ASH) annual meeting in Orlando, almost a third of patients (32%) on DOACs were also on aspirin without any clear indication for the antiplatelet agent.

The study, presented by Dr Jordan Schaefer from Michigan Medicine, comprised more than 2,000 patients from six centres who were newly established on DOAC therapy for the prevention of strokes related to their atrial fibrillation or for the treatment and prevention of VTE.

Patients with a history of valve replacement or recent MI, the strongest indication for aspirin use, were excluded from the study.

All patients were followed for a median of 15 months.

There was no significant difference observed in other bleeding categories – fatal, life-threatening or intracranial/intraspinal.

“We did see an increased rate of ED visits and hospitalisations in patients on DOACs with aspirin but this did not reach statistical significance in comparison to other patients on DOAC alone,” Dr Schaefer said.

“In conclusion, we found that aspirin and DOAC led to an increased rate of bleeding especially clinically relevant non-major bleeding and we did not observe a difference in thrombotic events.”

“These findings need to be confirmed in larger studies but until such data is available, clinicians and patients should continue to balance the relative risks and benefits of adding aspirin to their DOAC therapy.”

It was noted that there was often an under-recognition by clinicians that their patients were taking aspirin which is available over-the-counter.

The findings from the real world data are consistent with a recent post-hoc analysis of ARISTOTLE trial data, as previously reported in the limbic, which found that the combination of NSAIDs and DOACs increased bleeding risk.